After conquering Spain at the beginning of the 8th century, the Arabs also advanced far into France. Local lore in Aubusson has it that the town was founded by Berbers who stayed after their defeat at the Battle of Tours. Could it be that these Berbers brought their superior textile technology with them? This is an intriguing thought, but on the other hand there were Iron Age and Roman settlements in Aubusson, and the first evidence of tapestry weaving is not until some 600 years later. We may never know, but one fact will not have changed over the centuries. The acidity of the local River Creuse helps to degrease the raw wool and the fixing of the dyestuffs. There is evidence that Louis I de Bourbon invited Flemish weavers to Aubusson when he renewed the town’s privileges in 1331. If this was indeed the start of tapestry weaving there, then we need to ask who knew about the quality of the local water and what it was used for. Wool had been produced in the region for centuries. What we know for certain is that some forty years later, Louis I d’Anjou commissioned the most ambitious tapestry project, the Apocalypse d’Anger, in Paris. When we look at it we see that tapestry weaving is already at its peak. Technically and aesthetically it is not something new. An indication of a connection to Flemish weavers could be the use of the horizontal loom and that the weavers had the same patron saint, St. Barbara. The earliest tapestry from Aubusson we know of dates from 1501. Production in the 16th century featured hunting scenes, biblical stories and tales from classical mythology. In the competing neighbouring town of Felletin, just five miles south, the first recorded tapestry was made in 1457. France has been famous for fine craftsmanship in folk arts, namely wood carvings and hand woven rugs and tapestries. 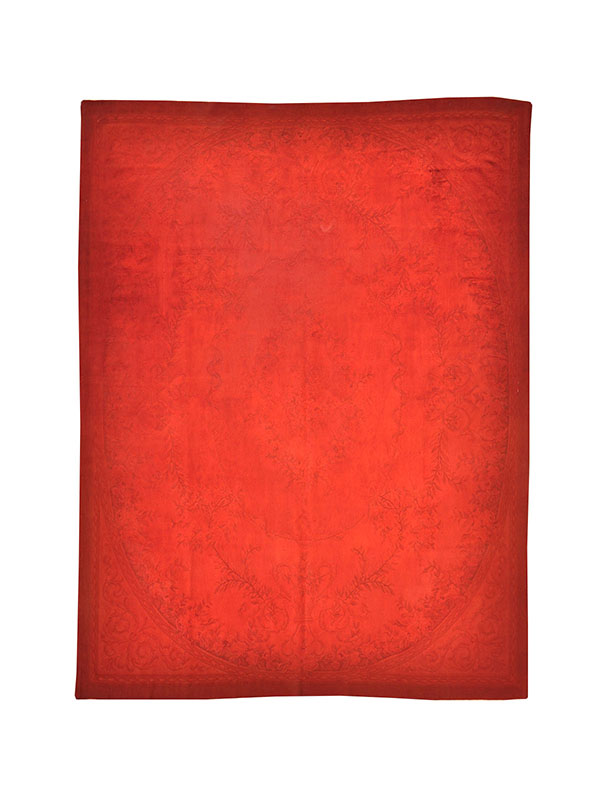 In the second quarter of the 17th century the painter Isaac Moillon designed several cartoons for tapestries of which we can today see examples in the Musée de Tapisserie in Aubusson and in the Chateau de Villemontaix. In 1665 Aubusson was given the privilege being a ‘Manufacture Royale’ and since then all its tapestries have the inscription ‘RM Aubusson’ on a blue minor outer border. Felletin received the same status in 1689 and marked its tapestries accordingly on a brown outer minor border. So even when the inscription itself is lost we can sometimes deduce the place of origin from the colour of the minor border. In the late 17th century severe persecution forced many Huguenot Protestant weavers to flee from France, and by the beginning of the 18th cenury the economic situation in Aubusson was dire. On the other hand, among the aristocracy demand for oriental carpets was still high. Thus, as with the Savonnerie production a hundred years earlier, it was thought that local production would be cheaper and that the local manufacturers would profit as well. In 1731, the ‘Peintre du Roi’ Jean-Joseph Dumons, was appointed to provide designs for tapestries to enhance the quality of existing Aubusson production. In 1742, a state funded design school under Dumons’ supervision was established. A year later carpet weaving was introduced to Aubusson. Until then the manufacturers had only woven tapestries, and the weavers, all men, worked on horizontal looms. Women were fordidden to work on horizontal looms for ‘health reasons’. But carpets were made on vertical looms and their production used cheap labour provided by women and children. To help the fledgling industry the King gave eight looms to the weaving families and sent the inspector of the Royal Manufactories to encourage the production of ‘tapis de pied, facon de Turquie’. The carpets of Aubusson are made of wool on a hemp foundation, using the symmetric knot, and the wefts are slightly depressed or on one level, giving the back a slightly ribbed or flat appearance, unlike the heavily depressed Savonnerie carpets. Kilim or Durie rug are quite thin and recommended to be used with a customized rug pad, which will keep it from moving and create extra cushioning for a soft and luxurious feel. 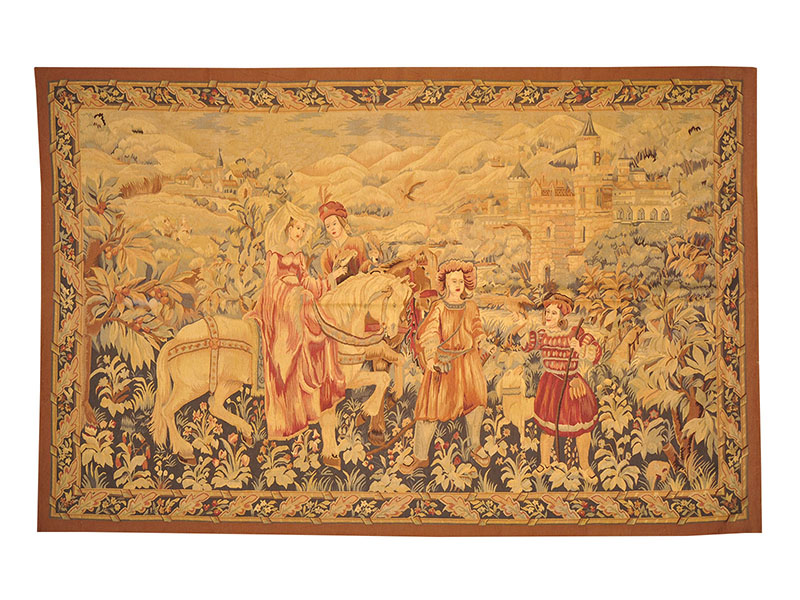 The first Aubsson carpet was woven in 1743 by the weaving family of Barbat, who had until then only woven tapestries. Its quality was favourably judged in Paris, and other carpets were soon ordered. Amazingly No. 28 of this production survives in situ in the Cardinal Armand-Gaston de Rohan Soubise Palace in Strasbourg, where it has lain on the floor of his private chapel since at least 1749. Work on this 565 x 465 cm carpet began in May 1745 and was finished in autumn the same year. Its design is a pastiche of a 17th/early 18th century Ushak carpet from Anatolia with his coats of arms emblazoned in the centre. Louis XV and his mistress Madame de Pompadour ordered carpets from Aubusson but also sent them examples of Savonnerie rugs to familiarise the weavers with European designs, as oriental ones were no longer fashionable. The tapestries of the 18th century were designed by the best artists of the time, including Jean-Baptiste Oudry, Charles Le Brun, Francois Boucher and Antoine Watteau, and focused on mythological stories, Fontaine’s Fables, the Metamorphosis of Ovid, genre scenes, allegories and exotic animals. In 1768 production of moquette carpets begun in Aubusson. Technically these are more closely related to velvets than carpets and could, especially after the introduction of the Jacquard loom, be produced cheaper and quicker once the loom was set-up. Their rivals in Felletin started weaving carpets in 1770 and moquettes around the same time. Louis XVI and Marie-Antoinette ordered many more carpets and a 1786 inventory from Versailles lists more than one hundred carpets from Aubusson. The French Revolution halted production, but Napoleon quickly established new demand. After Marie-Antoinette’s flowery rococo designs, clearer, classicist, empire designs prevailed. During the 19th century designs changed with the government, either towards classicism in the Second Empire or rococo in the Third. After 1867, the looms in Aubusson were driven by steam engines. In the 20th century, moving away from simply repeating the styles of the past, the engraver and artist Antoine-Marius Martin, who became head of the National School of Decorative Art in Aubusson in 1917, began to encourage modern artists to work in tapestry. In 1925, the school had a prominent presence in the International Exhibition of Modern Decorative and Industrial Arts in Paris. Painters such Paul Vera, Emile Bernard, Paul Deltombe and others took part, but Martin also encouraged local talent. His idea was not to see tapestries as another form of painting: instead he wanted artists to work directly in the medium. The artist Jean Lurcat wove his first tapestry in 1917 and would later give up painting in favour of weaving and arguably become the major tapestry artist of the 20th cent. In 1937, he saw a suite of eleven Feuilles de Choux tapestries with fantastic beasts in Aubusson and was entrhalled by them. A collaboration between the Aubusson workshops and Lurcat ensued and he developed the ‘carton numerote’ technique, which simplified the weaving process. In the wake of this and other factors a tapestry ‘renaissance’ took place in the middle of the 20th century and many institutions and companies, as well as private people commissioned tapestries. Today Aubusson’s workshops still weave tapestries by contemporary artists.

1800GetARug is one of the major sources of Aubusson rugs at discount prices and located in New Jersey, only minutes from New York City. You can also choose to buy an Aubusson rug online and have it delivered to your home anywhere in the world with a full refund guarantee.